In this article, I will give 2 proofs of this proposition:

The second proof is shorter, clearer, more insightful, and more self-contained. The first proof is the first one I delivered; it is longer and more technical.

So why write about the first proof at all? Because I see a few benefits to it:

Given two finite sets $X$ and $Y$, a discrete memoryless channel is a specification of probability distributions $P(y | x)$, for $x \in X$ and $y \in Y$.

Informally, this notion is motivated as follows: a sender chooses a message $x \in X$ to send, which after going through the communication channel will result in a receiver receiving some $y \in Y$. In an ideal world, we would be certain of what $y$ would be received after sending $x$ (in other words, y would be a function of $x$); but unfortunately, the channel adds random noise to the signal, such that after having chosen to send $x$, we only know the probability distribution $P(y | x)$ of what might be received.

Because the channel consists of $|X|$ probability distributions over a set of $Y$ elements, the channel can be represented by an $|Y| \times |X|$ transition matrix $Q$:

Therefore, each cell of $Q$ contains a values between 0 and 1, and the columns of Q sum to 1.

What we want to prove¶

The result we want to prove is the following:

Given a probability distribution over $X$, the function $I: Q \mapsto I[X;Y]$ is convex.

With regards to the capacity of conveying information, mixing 2 channels is always worse than using the most informative of the 2 channels we started with.

In particular, mixing 2 fully-deterministic channels (which are maximally informative) can result in a noisy channel!

A common approach to proving that a function is convex is to differentiate it twice, yielding a Hessian matrix, and to prove that this Hessian is positive semidefinite. That's what we'll set out to do here.

To make calculations more lightweight, we'll use some shorthand notation:

Recall that $\rho = Q \pi$, which can be reformulated to:

Differentiating one more time, we obtain the entries of the Hessian:

Proving the Hessian is positive semi-definite¶

Ordering the indices $yx$ in lexicographic order, thanks to the $\delta_{y=v}$ factor, we see that the Hessian matrix has a block-diagonal layout, with diagonal blocks $B^{(y)}$ of shape $|X| \times |X|$. It is therefore sufficient to prove that each diagonal block $B^{(y)}$ is positive semi-definite.

Therefore, our goal becomes to prove:

Some justifications regarding domains of validity¶

Looking at the above derivation, you may want to object as to the validity of certain derivations. I'll try to make the required justifications here:

You treated $I(Q)$ as a function of $|X||Y|$ unconstrained variables, whereas it's really defined on an $|X|(|Y| - 1)$-dimensional polytope, because of the constraints on the columns sums.

True, but it doesn't hurt to extend the domain of definition of $I(Q)$ - if the extended function is convex, so is its restriction to values of $Q$ that are truly channels.

To differentiate, you have assumed that $Q_{yx}$ is non-zero.

Indeed; we prove the convexity of $I$ to the (dense, open and convex) subset of $Q$s where that's true, and can then conclude $I$ is convex on its entire domain using a continuity argument.

To differentiate, you have assumed that $\rho_y$ is non-zero.

True; however, observe that this assumption is valid provided that all $Q_{yx}$ are non-zero.

We now revisit the notion of "mixing two channels", by interpreting the mixing coefficients themselves as probabilities. 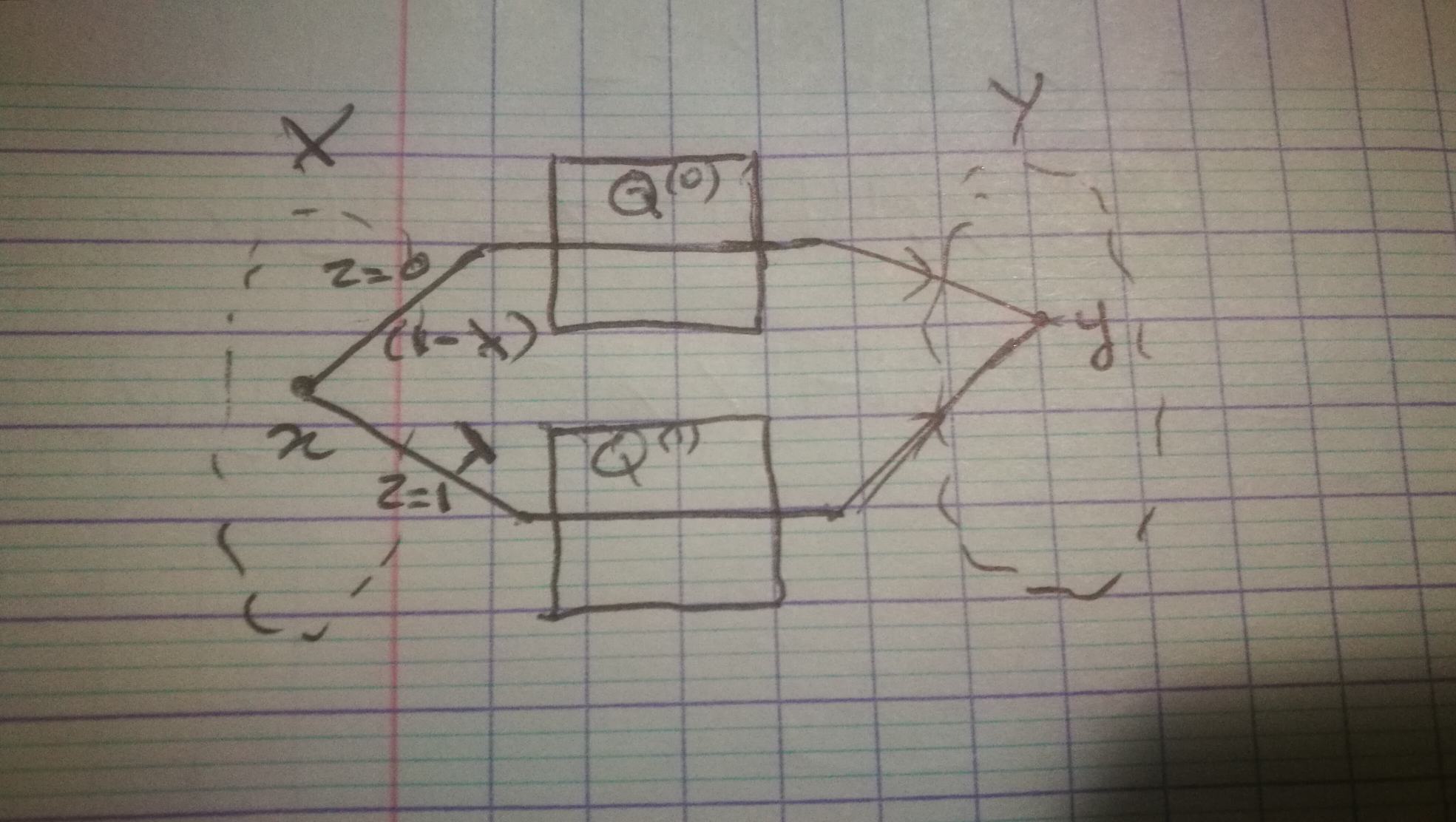 We can verify that this 'composite' communication channel is exactly equivalent to $Q^{(\lambda)}$:

We can now derive the proof by starting with an incredibly intuitive argument: knowing both $y$ and $z$ gives us more information on $x$ than knowing $y$ alone. Formally:

The last line expresses the convexity of $I(Q)$. QED.